A fourth generation Houstonian, Elizabeth Rockwell was a longtime friend and philanthropist of the University of Houston. Rockwell served as Executive Director, Private Client Division of CIBC Oppenheimer Corp. and was widely recognized as an expert in retirement, estate, investment, and tax planning. She died on Friday, Jan. 28, 2011. 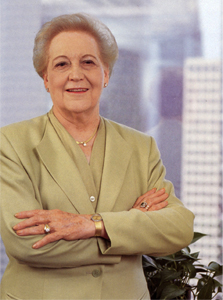 The ERISA legislation passed by Congress in 1974 added a new depth to her career. In 1975 she testified before the House Ways and Means Oversight subcommittee to help probe the problem areas of IRAs and was asked to comment on proposed regulations before the Internal Revenue Service. In 1978, a speech she had written was printed in the Congressional Record. This was done at the suggestion of the staff of the Joint Committee on Legislation because it pinpointed the problems created by institutions unfamiliar with the IRA rules and regulations. Her work in this area singled her out with national recognition.

Among her numerous honors, she received an Honorary Doctorate of Humane Letters from the University of Houston, the Distinguished Alumna Award from the Houston Alumni Organization and from the UH Bauer College of Business, and the Distinguished Service Award from the Health Law Policy Institute. Throughout the years she was recognized for her many achievements by the Education Foundation of Harris County, the Houston Community College System’s Television Station Advisory Council, the Houston Mayor’s READ Commission, the Freedoms Foundation of Valley Forge, the Greater Houston Women’s Foundation, the Asian American Women’s Forum, the American Business Women’s Association, KEYPORT Provident Life Insurance Company, the Council for Advancement and Support of Education, the Education Foundation of Harris County, the Houston Community College System, CIGNA Insurance, Hartford Insurance Company, Allmerica Insurance Company, Texas Leaders Round Table, the River Oaks Business Women’s’ Exchange Club, the Mirabeau Lamar High School Alumni Association, and the Galveston Historical Society.

Since the early 1990’s, she qualified to be a member of the Million Dollar Round Table and the Texas Leaders Round Table. She also authored a monthly column for the Houston Chronicle.

Elizabeth attended public schools in Houston before attending Rice University and the University of Houston, where she majored in Business Administration and Accounting.